Running Image for Linux Without a Boot Disk


To run Image for Linux (IFL), you would normally create a bootable CD/DVD or USB flash drive, and then boot from that media. This article will describe a method for running IFL without a boot disk.  Instead, IFL will run from a boot file located on your hard drive.

There is a similar article that describes how to do essentially the same thing with Image for DOS (IFD) instead of IFL. You can find that article at this link:  https://www.terabyteunlimited.com/howto/howto-ifd-bootfile.htm

Booting from a "boot file" is made possible by the free TeraByte Unlimited BOOTFILE (bootfile.exe) utility, which is included with the TeraByte OS Deployment Tool Suite.  The BOOTFILE utility can configure the Master Boot Record (MBR) to boot from an NTFS, FAT, or FAT32 partition that is contained in a continuous file in an NTFS, FAT, or FAT32 partition.  There are many different ways to configure a boot file, but in this case we will configure it to boot from Windows into IFL. Once booted into IFL, the MBR is automatically restored by the Linux version of BOOTFILE. This prepares the system to boot back into Windows again (i.e. boot normally) when finished with the IFL session.

Booting from the Boot File

After setupifl.bat completes execution, the target directory specified in setupifl.bat (C:\IFLBOOT by default) should now exist, and should contain 3 files; the IFL boot file, the bootfile.exe utility (Windows version), and a batch file to initiate booting from the boot file. The name of the batch file and the boot file will be based on the value chosen for the IFLBIN parameter in the setupifl.bat file. By default, IFLBIN is set to "ifl", so the batch and boot files will be named run_ifl.bat and ifl.bin respectively, as shown in the screenshot below: 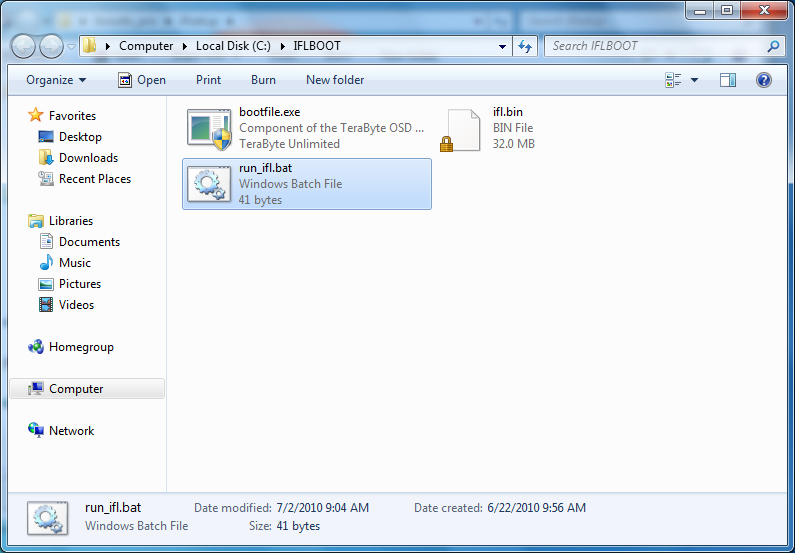 To initiate booting from the boot file, double click the batch file. This should result in the system rebooting, and then coming up to the initial IFL boot menu, as shown in the screenshot below. Use the boot menu to boot into IFL as you normally would. When the IFL boot disk gets initialized on boot, the MBR will be automatically restored by the Linux version of BOOTFILE so that on the next reboot, the system will boot normally. 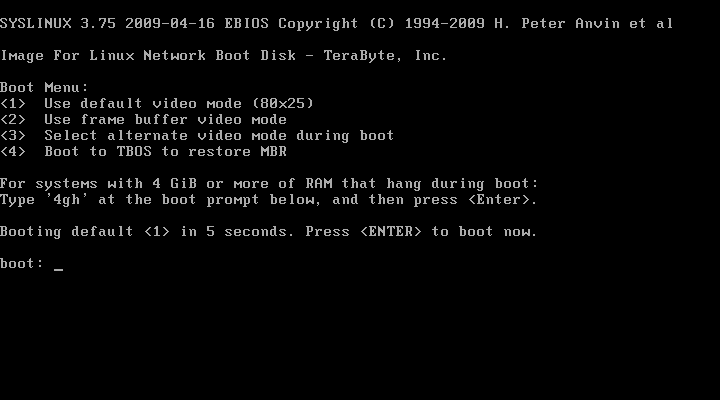 The IFL boot menu shown above is the same as the standard IFL boot menu, with the exception of item 4. The purpose of item 4 is to provide an easy method of restoring the original MBR should IFL fail to boot (hang) on a particular system. This situation should be rare, but it would leave you in a difficult predicament if it did occur, since you would not be able to get back into your normal OS after attempting to boot IFL. If this does happen, item 4 is provided so that you can choose it (type 4, then press <Enter>) to restore the original MBR. The system will be back to normal on the next reboot.

ifl_boot - This file is the starting point in creating the IFL boot file. It  contains a 32 MiB FAT file system that has syslinux installed, and also contains a floppy image file containing the DOS version of bootfile. This file can be booted from the boot menu to restore the MBR in the event that IFL fails to boot on a particular system.

ifl_boot.cfg - This file can be edited to configure the SSHD server to be started on boot, and also to configure one or more scripts to execute automatically.

ifl_boot.tbs - This tbscript is executed by tbosdtw.exe, which is called from setupifl.bat. It mounts and copies files to the IFL boot file.  Processing .tbs files require the professional (non-trial) version of tbosdtw.exe.

ifl.ini - This file can be edited to add any custom IFL settings as documented in the IFL manual. The file is empty by default, and is copied to the IFL boot file by the ifl_boot.tbs script.

setupifl.bat - This batch file is executed to create the IFL boot file, as well as a batch file to boot from it. These files, along with the Windows version of bootfile.exe, are copied to a specified folder. The beginning of this file contains variables that can be configured to your preferences. These variables are documented in the file.

ifl_scripts - This folder is where one or more bash scripts can be placed so that they will be copied to the IFL boot file by ifl_boot.tbs. To have one or more of the scripts executed automatically on boot, edit and uncomment the RUNSCRIPTS option in the ifl_boot.cfg file.

You can use IFL itself to determine a command line that you may want to use in a script (see steps 7 and 8).  To do this, proceed as follows: