QnE Desktop Companion is an excellent package that you owe it to yourself to try!

We’re kicking out affiliates who use fake review sites!

Subscribe to the RSS feed or visit the forums for the latest versions and announcements.

A collection of quick and easy to use utilities

QnE Companion is a set of quick and easy to use utilities for your PC. Boost your productivity with a clipboard manager, screen capture utility, launcher, and desktop icon utility. These utilities can be conveniently and quickly accessed from the Windows taskbar, a small floating window or through traditional shortcuts. QnE Desktop Companion is an excellent package that you owe it to yourself to try. 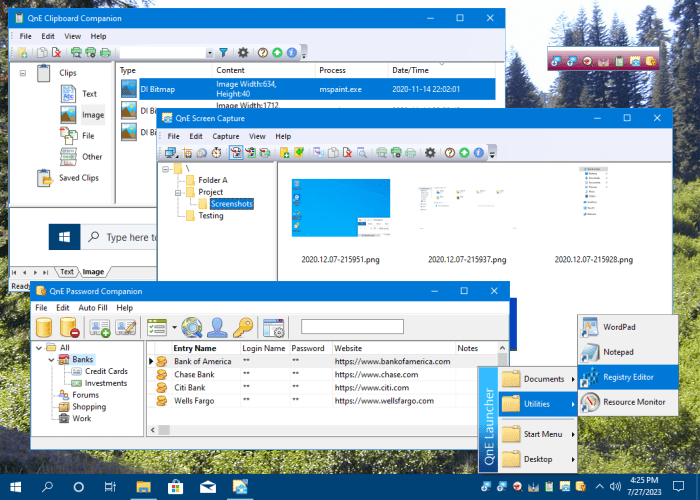 Click here if you have purchased this product and need your product key.

The QnE Clipboard Companion extends the ability of the standard Windows clipboard by storing your clips in an easy to access list. When you need to refer to the clip again, simply select it from the list and the Windows clipboard is loaded and ready to be pasted. It gives you the ability to filter/search, sort and categorize your clips with ease or even store commonly used clips permanently for quick access. You’ll be amazed how much more productive you become using QnE Clipboard Companion.

The QnE Screen Capture utility makes it easy for you to capture a picture of your screen. You can capture the entire screen or an area of your screen with ease. Multiple monitor support is included. If you have ever wanted something shown on your screen captured to print, email, or retain for later, this is for you.

The QnE Desktop Companion is available as both a floating window and a taskbar toolbar. Whichever form you use it, it provides access to the QnE Icon Companion and a single location to quickly launch the other utilities included in the package.

The QnE Icon Companion, which is accessed through the QnE Desktop Companion, provides you with all the functionality you need to work with the location of icons on your desktop. If you’re like many people, your desktop is a sea of program and document icons. Install a new program or add a new file to the desktop and it can be almost impossible to find. Enter the QnE Icon Companion search feature that flashes the desktop icons that matches a given criteria such as the latest created, latest modified, oldest created, oldest modified or by text pattern. Another feature includes saving and restoring desktop icon locations. If you have ever lost your desktop layout due to resolution change, remote desktop, or a new icon is added that pushes everything out of place you’ll appreciate the ability to restore a layout you saved. Some other features include minimize all desktop windows, undo minimize all, and refreshing the desktop.