Overview: This tutorial covers installing a Windows XP storage driver by using the DOS/TBOS version of TBOSDT from a bootable USB flash drive containing all files required to install the driver. The USB drive boots using TBOS, which is a small operating system from TeraByte Unlimited included in the TeraByte OS Deployment Tool Suite (TBOSDTS).


While scripting is powerful and flexible, TeraByte plans on providing an interactive wizard in the first quarter of 2009 for those individuals users who don't understand or need scripting.


Starting Point: A typical scenario for using the procedures below would come about when an existing Windows installation (for which an image exists) needs to be restored on a system where the storage controller is not compatible with storage driver used on the original system. Such conditions could occur when the motherboard or entire system has been replaced. Because the target system has a different mass storage controller (for example, a SATA controller rather than an IDE controller), the restored image will not boot because it lacks the correct driver. This is where TBOSDT comes in.


The starting point for the procedures outlined below will be an image of a Windows XP partition that has been restored to the boot drive (HD0) of the target system. Since the driver for the new hard drive controller has not yet been installed, the Windows partition will not boot on the target system.

When restoring the Windows image, you should ensure that the restored partition is set active, and that the standard MBR code has been installed. When restoring a single partition with any of the TeraByte Unlimited image products, the Set Active and Write Standard MBR Code restore options can be used to ensure those conditions. They are not needed nor available when restoring an entire drive.

This tutorial will use the specific example of installing the driver for the Intel SATA AHCI Controller on a restored image of Windows XP (this is the driver most users require for Windows XP to run on a new SATA system.  To locate that driver, see the Creating a Windows XP Slipstreamed Disc using nLite tutorial). In addition to this tutorial, please refer to Application Example #2 near the end of the TBOSDT manual (tbosdt.pdf), where you will find a description of this overall process.

The target system must support booting from a USB drive

Starting with the downloaded TBOSDTS distribution file (tbosdts_en.zip), extract the contents to a convenient location, such as a folder on the desktop. Note that the actual TBOSDTS programs and support files will need to be extracted from tbosdts.zip, which is a secondary zip file contained inside of tbosdts_en.zip. This file requires a password to unzip, and that can be found in the readme.txt file inside of tbosdts_en.zip. Once extracted, you should have a folder (typically named tbosdts), with the following contents: 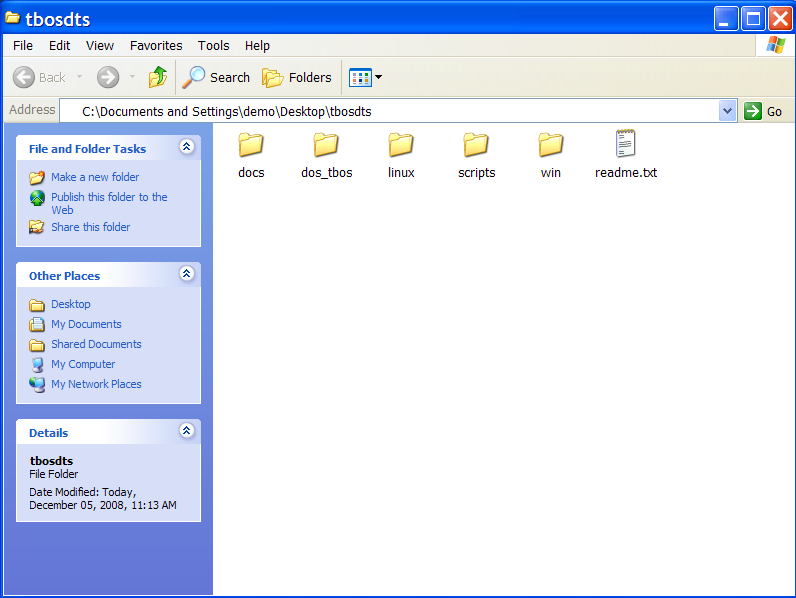 In this step, there is a choice of creating the boot disk on the USB flash drive in “Partition” mode, “Floppy” mode, or “Normal” mode. All systems capable of booting from a USB drive should work with at least one of these modes, but some may not work with all three of them. This situation is BIOS dependent, and is why more than one mode is offered. The characteristics of the three modes can be summarized as follows:

Which mode to use will depend upon which one(s) boot successfully on your system, as well as the space required to hold the Windows driver files for the specific driver being installed. The driver files for the Intel SATA Matrix driver used in this tutorial require about 370KB, and would therefore would fit on the flash drive using Normal Mode if desired.

The difference between Partition mode vs. the Floppy and Normal modes is that Partition mode causes the drive to be seen as a hard drive by the BIOS. When the drive is booted from, it will usually become HD0 and cause the internal Windows drive to shift to HD1. This does not happen with the Floppy and Normal modes. Therefore, which mode is used will affect the contents of the Stage 1 script, because it needs to mount the Windows partition from the correct drive. The contents of the Stage 1 script are covered in Step 5.

To create the boot disk, connect the USB flash drive, and start up the maketbos.exe (MakeDisk) program located in the dos_tbos folder.

After the License screen, select all three options on the TeraByte OSD Tool on the “Select the optional components” screen. 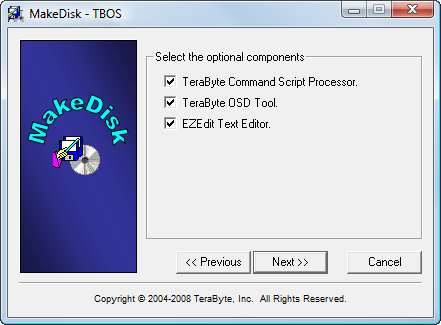 On the “Select target” screen, select the USB flash drive, and then select Normal, Floppy, or Partition mode under USB Mode. We'll select the Partition option here as it is the most compatible option. 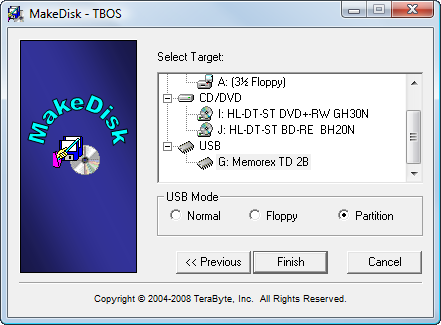 The files listed in the required files section above must now be copied to the USB flash drive. These can be located as follows:

tbosdtw.exe (Windows version): Located in the tbosdts\win folder. This file is named tbosdtw to differentiate it from the DOS/TBOS version already on the boot disk.

iaahci.inf, iaahci.cat, iastor.sys: These are the specific driver files needed to install the Intel SATA driver used in this example. These files will be named differently for other drivers.

To boot from the USB flash drive, you will typically need to enter the BIOS setup and change the boot order so that the system will boot from the USB drive. Some systems may also provide a key to press during boot, which will bring up a menu of devices to boot from. If so, you can select the USB flash drive from that menu, rather than entering BIOS setup. If the flash drive does not boot, and you know the BIOS settings are correct, return to Step 2 and try a different mode.

If the boot is successful, it should leave you at the TBOS Command Interpreter prompt. From there, you can launch TBOSDT.EXE to determine/verify the hard drive number and partition ID for the Windows drive/partition. To do that, type TBOSDT and press enter.

Step 5: Determine the location of the Windows partition

Those two commands will list the partitions on BIOS drives HD0 and HD1 respectively. Observe which drive is the internal drive (the Windows drive), based on the partition(s) it contains. In most cases, the Windows drive will be HD1 when the system is booted from the USB flash drive created using the Partition mode, and will be HD0 otherwise. However, this should always be verified, and not assumed.

A typical output for a drive with one primary partition will look similar to the following:


The line above is showing a drive with one primary NTFS partition of approximately 17 GiB, and a partition ID of 01. Make a note of the hard drive number and partition ID for the Windows partition, they will be used in Step 6 when editing the drvins_1.run script.  On a drive with just one primary partition (as this example is assuming), the ID will be 01, but could be a different value with other partition layouts.


When finished, type ‘exit’ and press <enter> to quit TBOSDT. This will return you to the TBOS command prompt.

For my example below I found the Windows partition is on HD 1 with the ID of 02 by looking at the Size and File System: 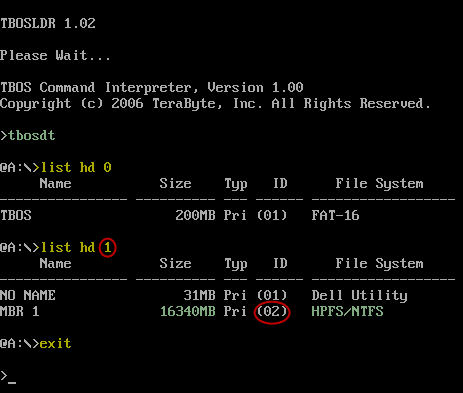 Step 6: Edit the TBOSDT scripts on the USB flash drive

Once the file is open make the following changes: 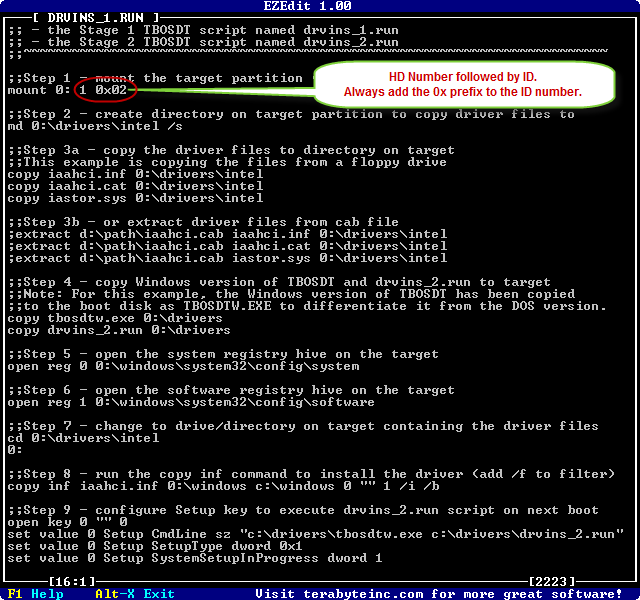 Edit the drvins_2.run file (assumes the editor is still open from editing drvins_1.run above) 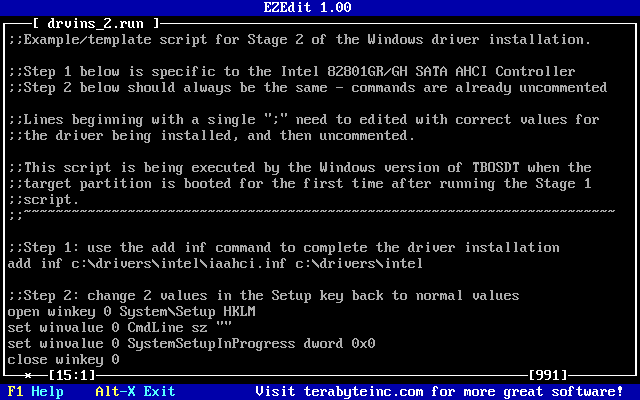 From the TBOS command prompt, run the command ‘tbosdt drvins_1.run’ to execute the Stage 1 script.

Observe the output of the script as it executes, and watch for any error messages. Common causes for errors include:

The script must run without errors before the target partition can be expected to boot successfully.

When finished, type ‘exit’ to exit the command prompt. This will cause TBOS to prompt for a reboot by pressing <Enter>.

Before proceeding to Step 8, change the BIOS boot order back to what it was before so Windows will boot. If you selected the USB drive from a menu during boot (rather than entering BIOS setup), this should not be necessary.

Step 8: Boot from the target partition to execute the Stage 2 script

Once the Stage 1 script has executed successfully in Step 7, it should now be possible to boot from the target partition. The following sequence of steps is recommended: